Photo by Elevate on Unsplash

For small React projects, it's cool passing props between React components, from the Arctic to Antarctica 😃. With increasing complexity, we pass a bit more props and possibly throw in React Context to manage some state data between nested sibling components.

As the project grows, the need for a proper state management tool becomes unavoidable. This is the sweet spot for a tool like Redux in React projects. However, setting up Redux is considered herculean due to the amount of boilerplate required.

In this post, we'll set up a redux store suitable for large projects without shedding tears. This post's scope doesn't cover setting up Thunk middleware for async actions or persisting a store.

We'll focus mostly on store creation, project composition, entity reusability, and manageability. A considerable concern amongst developers using Redux in React projects is the convolution of the codebase with the increase in state variables.

Redux creates an application data store and provides logic to retrieve and modify the stored data. Wondering how state management works on the bare minimum? I wrote this post about it using HTML and JavaScript.

With accompanying tools like React-Redux, state management in React apps becomes seamless. With state hoisted from components into the application layer, interactivity in your frontend app becomes almost limitless.

Knowledge of JavaScript and React.js is required to follow through with this post. We'll create a simple counter app on CodeSandbox with data from the application state.

Create a new CodeSandbox using the React starter by CodeSandBox. You can find the final code for this post here.

The created project comes with boilerplate code with the app entry point in src/index.js and the home page in src/App.js. Basic CSS styles are written in src/styles.css.

Create the base HTML structure for the counter app with 2 buttons and a counter display in App.js. Modify the file to:

The buttons are currently inactive, and the counter display in the h2 isn't interactive.

The minimum package requirements for us are redux, react-redux, and redux-actions. Redux-actions is used to create actions neatly.

Add these dependencies in CodeSandbox using the "Dependencies" section of the Explorer. Once the modules are installed, the project automatically reloads.

A big part of setting up Redux for large projects is in the file structure. The structure should allow for easy maintainability and consider the separation of concerns in projects with multiple independent features.

For this setup, we'll make the following setup considerations:

Still complex? Let's create the folders to hold the setup for the "counter" feature.

In src, create a new folder named redux. In src/redux, create two files named store.js and reducer.js. Proceed to create a folder for the feature named counter.js in src/redux. 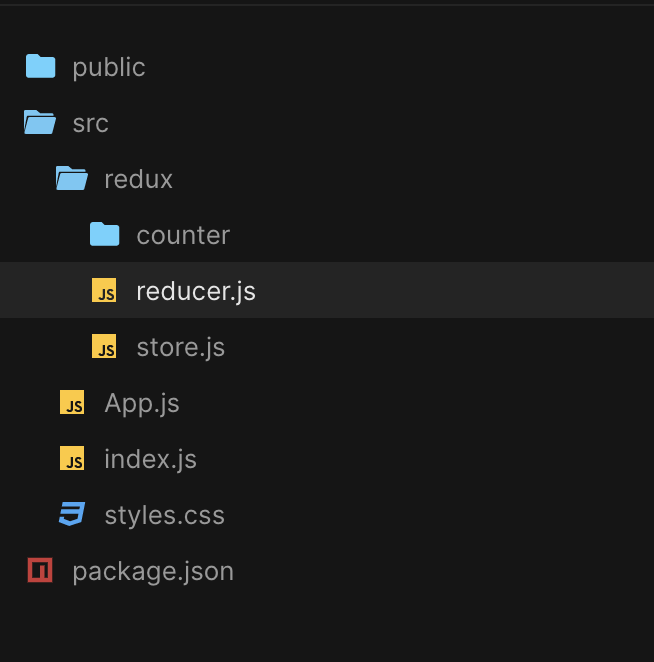 Note: An essential part of this file structure is reusability. We'll utilize named exports in most cases to ensure we keep functions within the same context together.

The base of Redux lies in 3 entities - Constants, Actions, and Reducers. You've probably heard these before, and to put them under the microscope:

Each feature folder will hold files for various actions and reducers on the feature, with all the individual reducers merged into a single "feature reducer". Each file will contain an exported constant, action, and reducer. Let's get right to it!

In an e-commerce project, a feature folder could be 'catalog', and the files will be setProductList.js, setSearchQueryand setFavoriteProduct.

In increment-counter-action.js, we'll create the constant, action, and reducer with:

We use the createAction function to create an action object with a specified constant and defined payload. The payload is an optional argument. Notice the separation of constant and action? These are also individually exported for usage outside the file. The reducer for this action simply increments the current state value by 1.

Repeat similarly for the decrement-counter-action.js file.

Next, we need to create a reducer for the feature, which uses a switch statement on the action constant propagated to return a specific reducer.

We simply created a reducer function that returns any of the created reducers depending on the provided action. Notice the flexibility in importing the constants and reducer? Everything is separated and clear as the highways during the COVID-19 lockdown! 😁

With a new action, we simply add a new case here, import the constant and reducer from a single file.

In larger projects, there are multiple features or scoped states belonging to separate portions of the app. Each has a folder and a feature reducer setup. In src/redux/reducer.js, we combine all of the feature reducers into a root reducer. Do this with:

The combineReducers function merges all the reducers into a root reducer. This is the state definition of your application. i.e., state.counter returns the data in the counter state. Depending on your state data structure, you can have multiple nested values and access them accordingly.

With the actions and reducers setup, we'll create the store. In src/redux/store.js create a store with:

You may wonder why the extra file just to create a store. In larger projects, other redux setups go in here. This includes setting up middlewares and adding persistent storage to the store. For this project, we'll have just the store created.

react-redux features a Provider component with which we will wrap our root element. This provides the store to the application. Modify src/index.js to do this with:

We wrapped all the app with Provider and passed it props of the imported store.

If you made it this far, you have setup redux and can utilize the app state's data.

react-redux provides two super useful hooks to store and retrieve data from redux. They are useSelector and useDispatch, to retrieve data and dispatch actions respectively. We'll modify src/App.js to utilize these hooks in making the counter interactive. Do this with:

Here, we imported the actions which will be dispatched on increment and decrement. We created two functions to handle the dispatch. The counter data is also retrieved from the redux state with an initial value of 0. In the case there is a payload, this is passed as an argument to the action call.

You can test out the buttons on end. 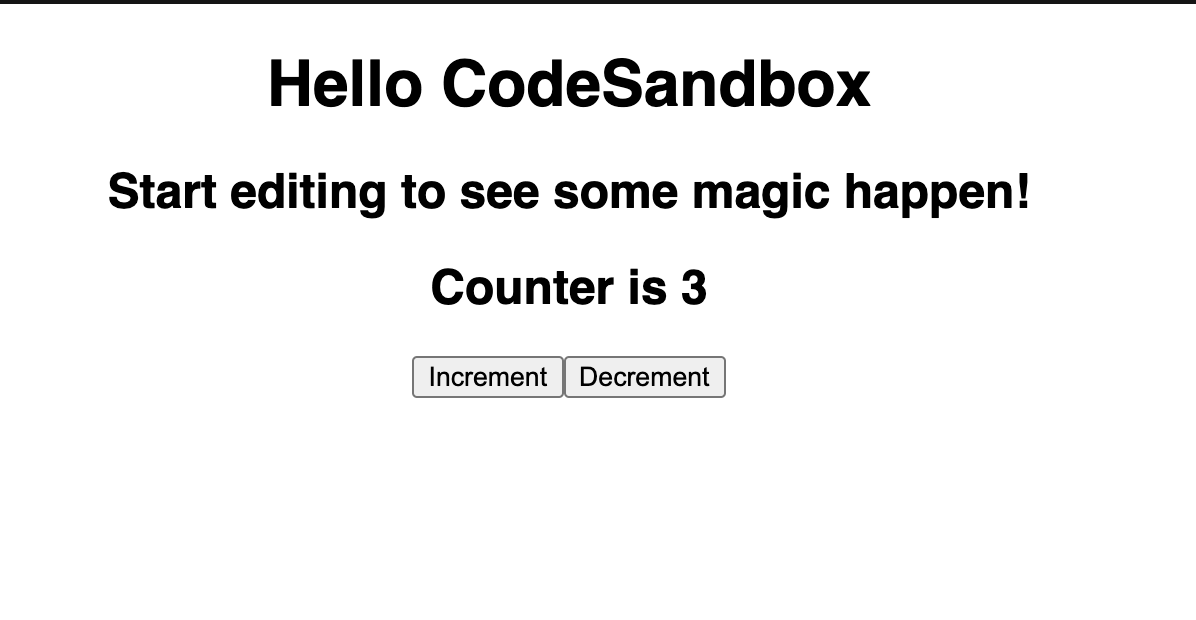 You can find the CodeSandbox demo here.

In this post, we set up a redux store with constants, reducers, and actions. The store data is utilized in a counter application.

A key takeaway from this post is in the redux store setup and the separation of concerns. This ensures that when the application size increases and state variables abound, setting up new actions and reducers are seamless. Also, the codebase is maintainable.

Here's to becoming better, and wearing a mask, for now. 😃